Today is International Women’s Day! The theme this year is “Make it Happen.” I suppose “it” can be whatever you want – getting the promotion, taking that leap to do something new, investing in yourself, taking control of your finances, getting fit, or throwing out the scale. 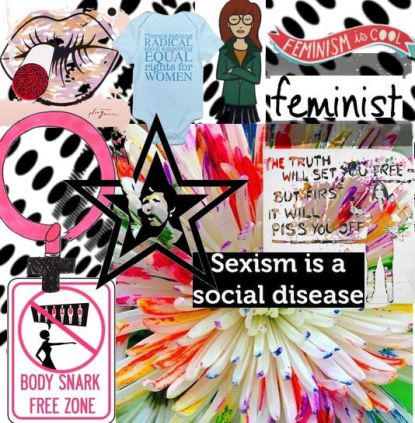 For me “it” would be saying something and getting involved in things I care about rather than sit idly by. Coming out as a feminist because it is something to be proud of, not something I should apologize for. Trying to be mindful of what I’m teaching by example means that this is on my mind a lot. I know I frame nearly everything in terms of being a mom now, but it’s because it’s changed my perspective of the world so much. I don’t mean that in a smug only-mothers-can-know kind of way. Not at ALL. It’s more in a I-didn’t-know-how-much-I-didn’t-know kind of way. Ya follow? Raising a human in this world is no joke. Walking the walk matters so much more.

Somehow the word “feminist” was given some unpleasant connotations  {a typical reaction to the fear of losing power is generally to discredit the opposition, amIright?}. What feminism isn’t is hatred of men {gender equality!} It’s not a criticism of traditionally female roles. It is only about opportunity. That is all. Opportunity to the same economic benefits and education. We should be treated with respect not because we are weaker, but because we are also people.  We make our own decisions about our own bodies.

I read recently that more US women are graduating with college degrees now, than men, yet women still are making 78% of what men earn. (This addresses some of the myths you’ll hear arguing that there are legitimate reasons for this.) Maybe this is encouraging and the shift toward women achieving equality in the workplace is moving faster. There are so many factors at work here: our dismal family leave policies in the US, the lack of women in Science and Math fields, the low pay for administrative and care giving fields that are largely filled by females and others.

If I could only choose to have one hope for my daughter’s future (aside from being healthy and safe and happy, of course) it would be that she always knows her worth as a person. And I think that believing in gender equality is inborn; no girl comes out of the womb feeling insecure about their intellect, shape, size, looks, etc, or thinking that they somehow deserve less money for the same job. It’s years of conditioning – the media, direct sexism, well-meaning friends and family who unknowingly pass on all of the “rules” for being a girl.

Yes, even their feminist mothers.

Even though I’m absolutely 100% for self-love and gender equality, I forget. I say self-deprecating things about my body. I apologize when someone bumps into ME in line at the grocery store. I overhear overt sexism and don’t say something. I realize that if I want to raise a strong, fearless, unapologetically awesome daughter I’m going to have to quit doing those things and show her by example that women can and should be for women, and that so much of that begins with how you see yourself.

It’s been on my mind a lot and thus reflected in what I’ve been reading lately, so I wanted to share some things I found particularly good. (Granted I am already the choir to which these women are preaching; I have beef with the princess agenda and forced gender stereotyping and I love to read anything backing me up on that..)

1. Dr. Rebecca Hains’ blog. A well-respected media critic, she wrote the book “The Princess Problem” which is still on my list to read. I really like the Parent-Child discussion guides for watching Disney movies, which help parents to help kids to think critically about the messages they are receiving (body image, violence, racial stereotyping, etc).

2. If Our Sons Were Treated Like Our Daughters is an easy but good read, that points out the ridiculousness of the gender stereotyping we place on girls by replacing “girl” with “boy,” “princess” with “prince,” etc. I wrote a story in this manner in high school in a creative writing class, in which a girl was praised and a boy was slut-shamed for the same event. It’s a really simple strategy for pointing out how unnatural gender stereotypes really are.

3. The LEGO Friends cartoon you’ve probably already seen, but it’s so good. Unnecessary gender stereotyping of toys makes me cringy when I think of my own daughter, and yet it’s still one of those things I find SO easy to fall into when shopping for other people’s kids who already have the gender-assigned obsessions with princesses or super heroes. I am vowing to be better about this.

Re LEGO Friends and other unnecessarily gendered toys, I wanted to point out that calling pink and purple blocks “girl LEGOs” implies that all the other colors are boy colors. I realize, then, that naming a day for women then, logically implies that all the other days are for men. And I guess that’s the point. We hope to be celebrated and represented, but on our own terms.

In some ways it seems surprising we’ve got so far to go in terms of equality, but when you really think about how culturally ingrained the messages are that will all soak in on a daily basis, it’s easy to see why. Our insecurities are deep and begin so early. If you let it, even when you mean for it not to, the world keeps pinging away at it our whole lives. Standards of beauty, expectations to be perfect wives and mothers, the importance placed on landing a husband.. those things are used against us to sell us things. And if you let it, the expectations for perfection distract us from real goals and progress and ass-kicking.

{Quote image source. Collage image is my own.}