A few times a year I end up going on a decrapification spree around the house, rounding up the things we don’t use and either giving them to someone we know can use them, or donating them to a thrift store. Despite the fact that we do this frequently, stuff still really adds up. I mean, I am a thrift shopper. A craft-maker. A re-user of things (hell-o! jar collection!). And people are always, always giving me STUFF. And I love it. I love finding clever ways to reuse things. I love that people think to give me things rather than throw them in the landfill. And I have great intentions for repurposing, many of which I get around to. Sometimes, though, it gets to be too much. There are lots of options for decrapifying. Yard sale. Selling online. Donating. Giving to friends/family. I’ve done them all.

Somewhere years ago, I heard about stuff swaps. AKA swap-and-bitch. How fun is that? I’ve been meaning to get one together for a while and this summer I finally hosted one (in June.. I’m a bit behind on the blogging). Swaps are awesome, because everyone has stuff.

Here’s how I did it, with much success.

That’s it! I ended up with several framed prints (just for the frames), some yoga attire, a cute halter, and a handmade crocheted hat. I unloaded about 6 large boxes of clothing, shoes and household stuff. 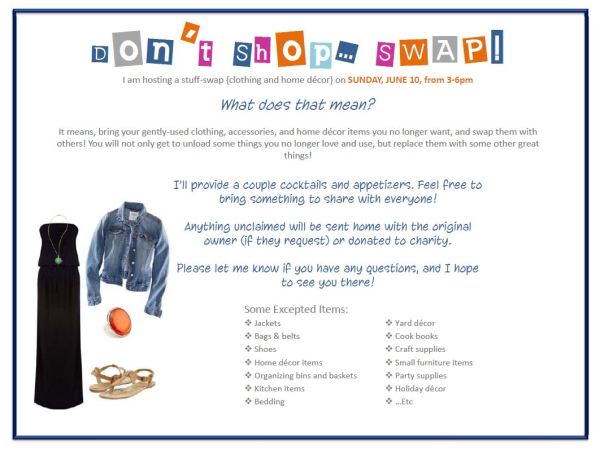 There are some benefits of swapping over just donating. First, it’s a fun and free way to spend time with your gal pals. Second, it’s easier to let go of the good stuff when it’s going to someone you know! It made culling easier, somehow. Third, the stuff you’re getting in return belonged to someone you know. If you have a used stuff phobia, you may not mind if you know the previous owner.

Has anyone ever hosted or attended a swap?